In my morning reading, I came across this little piece from Iain S. Thomas of I Wrote This For You: 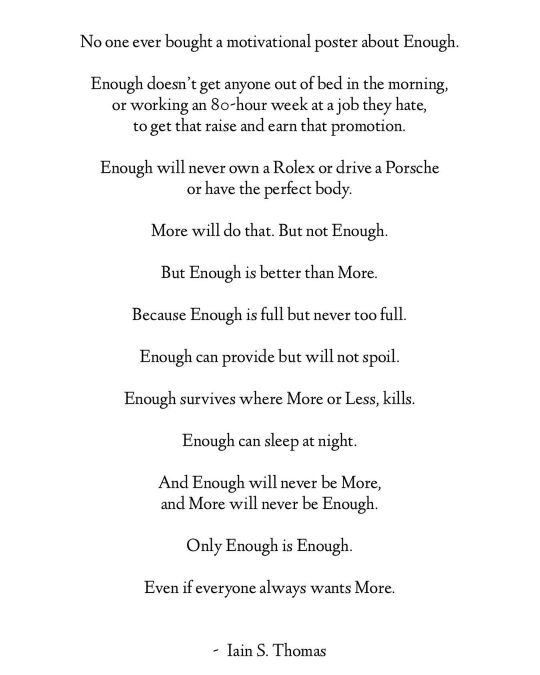 It’s such a very important message, and something I’ve been thinking about a lot lately.

Every individual has to decide what Enough is for them. Capitalist society wants us to believe that there is no such thing as Enough. We’re conditioned to Want, to chase more, bigger, better, faster. To keep up with those fuckheads The Joneses. But Enough exists, and in my experience, it’s a lot less than we maybe think it is.

Enough is where contentment lives. It’s where we find slowness, simplicity, quiet, presence, and gratitude. Enough is where we accept that we’re flawed but trying our best, that we can and should want to improve, but not at the expense of enjoying where we are.

Brianna Wiest wrote about the same thing a while back, saying:

I’m still trying to zero in on Enough in my life, and I’ve missed the mark a million times. But I feel like I’m getting closer, and that’s Enough for me for now.

This morning I was reminded by one of the more helpful accounts on twitter that the year is really winding down.

At this time of year, it often feels like the mind wants to pack it in and wait for the calendar to turn (or at least it does to me), as if there’s no point in trying to accomplish much else, as if we’ve moved past the point of productivity and into a barren season, idea-wise.

As that thought crept into my head, I recalled a blog post from a few years ago by Austin Kleon in which he talks about this. He says that the temptation to lapse into retrospection betrays how much time we really have, time that could be used constructively.

Kleon asks, “What else am I missing by being prematurely retrospective?” He then relays a story that I think ties together the year-end conflict we feel rather nicely:

One time my coworker John Croslin and I came back from our lunch break and our building’s parking lot was completely full. We circled the sweltering lot with a few other cars for what seemed like ages, and just when we were about to give up, a spot opened and John pulled right in. As he shut off the car he said, “You gotta play till the ninth inning, man.

It’s natural at the end of the year to start looking back at what went right, what went wrong, and how to use those lessons to forge ahead, but at what cost? As of this writing, there are 48 days remaining in the year. That’s a lot of time!

Play ’til the ninth inning. That’s exactly what I was looking for. The year is a baseball game with twelve innings and I want to play until the last out.

According to the small seasons of the sekki that I’ve written about previously, we are smack in the middle of “Ritto” (the start of winter) right now, but there are still two more seasons yet to come before the new year. Two whole seasons to write, to read, to try new things, to explore whatever it is that stirs your soul.

If we can commit to playing until the last out, think of how much more we can discover, accomplish, and grow.

I wrote a little thing yesterday, and then as often happens, the subject I wrote about continued to pop up throughout the rest of the day. Call it serendipity or some weird version of confirmation bias, but it happens often.

The topic was the seasons, or more accurately, how four seasons don’t seem like enough, and how living within a rhythm of smaller seasons might make more sense.

It wasn’t long after that I came across a little quote from Brittin Oakman, a poet of sorts on Instagram that I’d never heard of before:

Every season is one of becoming, but not always one of blooming. Be gracious with your ever-evolving self.

That got me thinking about the seasons in terms of slowness, of patience. Of not always having to be racing towards something and just letting life happen, like a flower blooming in the spring or, consequently, dying in the autumn.

Because even dying is a form of becoming.

According to the sekki, we’re in the midst of “Soko,” wherein we experience the first frosts and maple leaves turn yellow. The next small season will commence on November 8th with “Ritto,” which is the start of winter and marked by the ground beginning to freeze.

What a perfect time for slowness, for patience, for allowing life to progress at its own pace for once.

In my scrolling and reading this morning, I came across this piece from Kottke, quoting a Kurt Vonnegut graduation speech given at Fredonia State College, in which the great humanist writer argues that the four seasons we generally recognize aren’t enough.

One sort of optional thing you might do is to realize that there are six seasons instead of four. The poetry of four seasons is all wrong for this part of the planet, and this may explain why we are so depressed so much of the time. I mean, spring doesn’t feel like spring a lot of the time, and November is all wrong for autumn, and so on.

Here is the truth about the seasons: Spring is May and June. What could be springier than May and June? Summer is July and August. Really hot, right? Autumn is September and October. See the pumpkins? Smell those burning leaves? Next comes the season called Locking. November and December aren’t winter. They’re Locking. Next comes winter, January and February. Boy! Are they ever cold!

What comes next? Not spring. ‘Unlocking’ comes next. What else could cruel March and only slightly less cruel April be? March and April are not spring. They’re Unlocking.

This made me recall the twitter account I follow called Small Seasons, which follows the sekki, or 24 seasons used by Japanese and Chinese farmers prior to the Gregorian calendar. Small Seasons even has a widget to put the sekki on your calendar, which I’ve found to be helpful in trying to slow down a little this year.

And you can pair Small Seasons with the teacher and writer Matt Thomas’s blog post from a couple years back about living life more in concert with the seasons.

Fall is a time to write for me as well, but it also means welcoming—rather than fighting against—the shorter days, the football games, the decorative gourds. Productivity writer Nicholas Bate’s seven fall basics are more sleep, more reading, more hiking, more reflection, more soup, more movies, and more night sky. I like those too. The winter will bring with it new things, new adjustments. Hygge not hay rides. Ditto the spring. Come summer, I’ll feel less stress about stopping work early to go to a barbecue or movie because I know, come autumn, I’ll be hunkering down. More and more, I try to live in harmony with the seasons, not the clock. The result has been I’m able to prioritize better.

Prioritizing and finding a more natural rhythm in life are a couple of things I’ve been trying to be better about lately. Given the current hellscape nature and pace of the world, it seems paying a little more attention to that might be helpful to a whole lot of people.